I think you’re probably tired of seeing posts of my Splatoon avatar, so here’s a little change of pace! It’s a new year (two months into 2019, in fact), so I wanted to post a little update of my bullet journal.

And my new future log for 2019. I tried to go for a more “minimalist” approach for the borders, mostly because I didn’t want to draw so many lines! 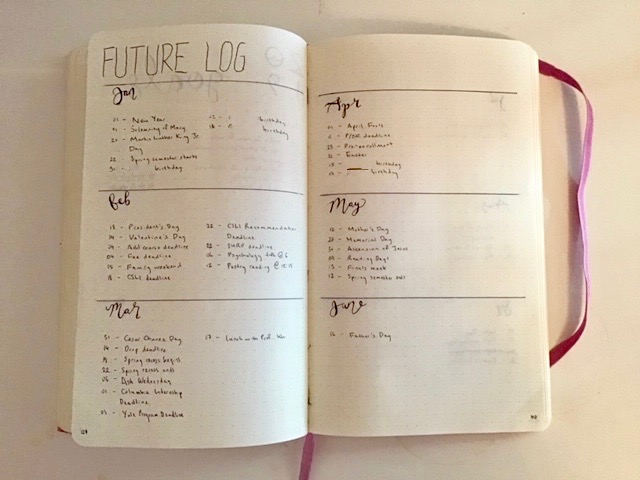 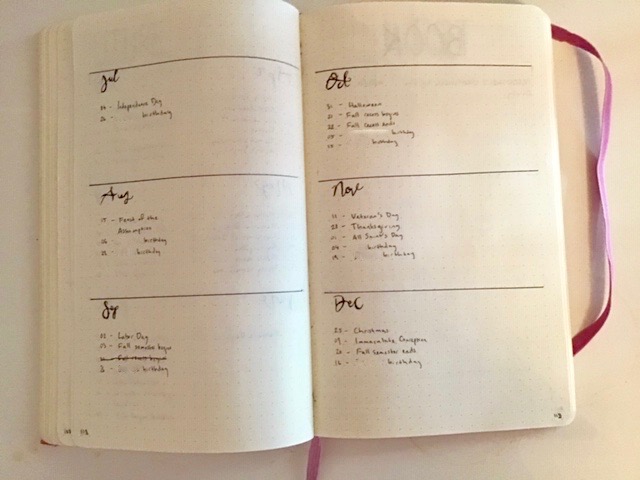 I’ve also finally finished my book list that I created two years ago! I started a new one right after my 2019 future log. 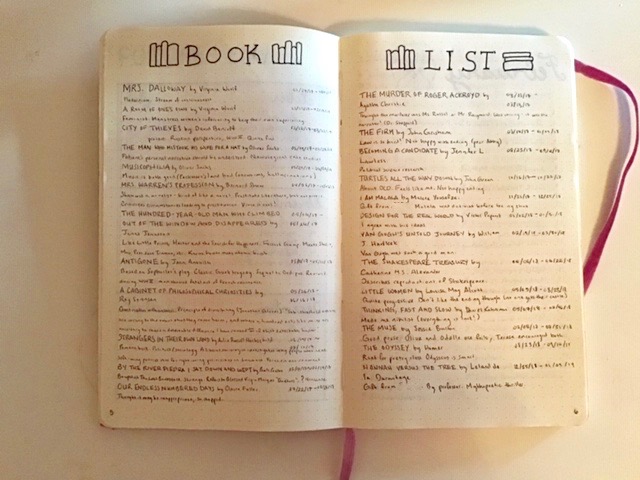 Photo credits to my grandma. I’m teaching her how to bujo!

If you’re a regular visitor to my blog or you’ve seen it before, you may have noticed that something has changed… practically the whole website! I decided to change the theme, because I felt like my old theme was too traditional for me, what with the serifs and monotone palette. Not that the theme itself is bad, but I guess my tastes have changed.

I do feel somewhat conflicted about not having my header picture with the logo. I tried adding it, but it felt sloppy and wasn’t well aligned with the rest of the features. I guess I get quite sentimental and attached to these things and that it’s time to let go.

I’ve also spent quite a while categorizing my posts, because for the past ten years that I’ve been blogging, I haven’t used categories! When I learned about them, I thought it was too late to add them to all of my posts, but I decided to undertake the task and just do it. And I have succeeded!

I hope you like the new updates. Let me know what you think!

I’ve decided to take a break from posting my drawings this week and instead show you one of my new “hobbies”: bullet journaling.

You might have heard of this relatively recent trend. If not, to explain it briefly, it’s about making your own planner using a blank notebook. This website explains it pretty comprehensively, and this website is the bullet journal’s homepage (yes, it even has it’s own website).

So today, I wanted to show you my own bullet journal! I started it last August and started using a new journal this February. Here’s a peek into my new journal.

Here’s also a peek into my old bullet journal. You can see how much I’ve improved aesthetically.

Comment below if you have a bullet journal yourself!

I do Art GCSE and have finally finished my coursework! After months of laboring over final touches, annotations, and what-not, I have completed my ‘final piece’.

The theme was ‘Similarities and Differences’. For this piece, I decided to “investigate the cultural significances of fruits in different literature pieces.” The first book I incorporated into my art was The Kite Runner by Khaled Hosseini. A symbol of this wonderful novel was pomegranates. As the main character’s friendship blooms, so does the pomegranate tree in front of the house. But as the friendship withers, so do the fruits decay. So, I put texts of this book into the background and then drew on top of it.

The second literature piece I investigated was The Schoolteacher’s Guest by Isabel Allende. The main character’s son is shot when trying to reach a mango from a neighbor’s garden. As the mango tree decays, the mother’s want of revenge grows.

Here are my final pieces! 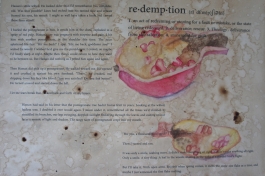 It took a lot of work, but I’m quite proud of it.

Today I woke up to a pleasant surprise: I have been nominated for the Blog on Fire Award by creativeliz! Thank you so much!

Nominate 8 of your favorite blogs and let them know:

Thanks again for the award!

So, another year has passed again, and another one has started. Lots of things happened in 2012, like the U.S. Presidential Elections, the (not) ending of the world, and, personally, my starting of high school! For my blog, I’ve also undergone many big changes, like turning it unofficially into my art blog and joining Illustration Friday. At the end of last year, I made a few resolutions for this blog. Now it’s time to check out how many I fulfilled!

Now, for my new resolutions:

So, these are my new resolutions. Have a great 2013 everyone! And let’s start fresh like this little sapling!

The WordPress.com stats helper monkeys prepared a 2012 annual report for this blog.

My record for most views in one day for this blog was 75 views, set on January 2009. But that record is now broken! On October 19th, I got 76 views for this blog. Thanks to everyone who helped make that happen. 🙂

As for updates, I am currently working on Illustration Friday’s new theme: Sky. I’ll probably post it in two days, but that depends on how much free time I have. I won’t give out any spoilers about the piece… yet. 😉

First of all, I’d like to say that I’m sorry that it’s been almost 2 months since I last posted some nonsense. The only time I seem to be on WordPress is when I a) check my stats and b) browse through the humor section in Freshly Pressed. But enough of that!

I’d like to talk – or rather rant – about FB today. (For those of you who live in the 80’s, FB stands for Facebook. (My computer must live in the 80’s, because right now it is underlining Facebook in red, saying that it is the wrong spelling.)) FB has recently created a new design for people’s profiles/pages. I’m fine with that: it’s always good to have some choices, right? But, in fact, this new design limits your choices. FB is now enforcing this new design on everybody, regardless of preference.

I was fine with the new chat design, I was fine when they made pressing the key ‘enter’ publish a reply. Those modifications were actually quite useful. But this new design – Timeline – is just plain confusing. First of all, you need a ‘profile cover’? I already have a profile pic, what more do you need?! Now I need to browse through my camera, find a picture that won’t embarrass me, and edit it to fit the size requirements. That’s just plain tedious!

Secondly, Timeline is supposed to organize my posts better. But it doesn’t. All the dates are mixed up so I don’t know which one I (or anybody else, for that matter) posted first. For instance, I posted these two posts one after the other. Which one did I post first, a or b? (Roll over the pic to see the answer.)

This is why I don’t like Timeline. I suppose I’ll have to live with it, but if there’s ever a petition going on, I’m in!

I had forgotten about all these things, actually, until last weekend. I was sitting in the waiting room in the hospital (oh! the horror!) when a familiar ABC tune rocked the speakers. WTF?! I thought, as I slashed the tiny heroes on my iPhone. Who dare disturb my rampage?! I glanced at the little TV hanging on the wall, and my thoughts of killing immediately vanished. It was…

5) The Busy World of Richard Scarry!

Doesn’t anybody remember the unique ABC song of that show? The only one that didn’t have the melody of Twinkle Twinkle Little Star? A is for apple, B is for bed, C is for crown that you wear on your head… Actually, that’s the only episode that I remember, the one where Richard Scarry and his friends learn the alphabet. But that’s how memorable it is! 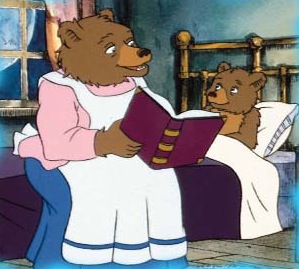 Aw… how sweet. The pictures are so adorable! I just refreshed my mind reading the Wikipedia page (there are pages there for practically everything!) and I can remember almost all the characters! What a great memory I have! 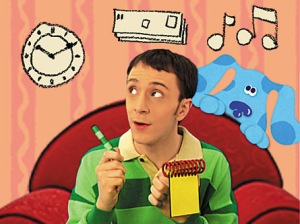 When he left the show for ‘college’, I cried so much. This was my favorite show! I even dedicated a chair to this show, called my ‘thinking chair’! How could he abandon me?! Well, I didn’t watch this after he left and his ‘brother’ came…

In an old house in Paris that was covered with vines, lived twelve little girls in two straight lines… the smallest one was Madeline! The cute little troublemaker who is so hard-headed. And this show actually helped me with French! Le chapeau, le chapeau… something to do with a horse losing his hat? I don’t know, but I do know that this was my favorite show!

Though I abhor his figure now, and cringe when his songs come out, I am told that I used to love this foamy dinosaur. Strange, no? I even went to his concert once, and cried when I was told that I wouldn’t be able to meet him. I guess that’s how much I loved him…

So there you have it! My top 5 favorite childhood TV shows! What are yours?

Join 284 other subscribers
Follow The Empty Notebook on WordPress.com